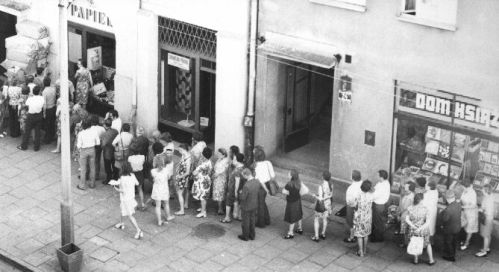 I would like to introduce you to a famous economist, János Kornai. He pioneered thinking and research on economic behaviour of communist governments that engaged in central planning – particularly in eastern Europe. One of the defining feature of such economies was shortages of everyday household products including food. Growing up in Hungary János had first hand experience of such shortages – queuing in shops was common. Kornai’s breakthrough idea was essentially that shortages were not just a failure of central planning in the sense that planning could be improved with better insights or more careful analysis, rather he showed that shortages were an inherent result of attempting central planning itself. Prices and wages were fixed by the state and producers were typically also state-owned monopolies, allocated some fixed quantity of goods to produce. With a guaranteed market and no competition, companies had no incentive to produce products tailored to the needs of customers. There were no bonuses or profits to be gained by selling more products or opening new markets. If the government production order was for ten thousand shirts, then ten thousand shirts would (usually) be produced. If the fashion was for blue shirts, but red shirts were easier or cheaper to produce, red shirts would inevitably be produced and factory owners would be paid regardless. A shortage of blue shirts would inevitably develop, and customers would ultimately be faced with a few unsatisfactory choices – either try to wait and queue up for a blue shirt, buy a red shirt instead, or go with no shirt at all.

At this point let us take a time out. First of all, I am not an economist. Second of all, Singapore doesn’t have food shortages or people queuing up for bread – in fact Singapore is hardly comparable to communist Eastern Europe at all. But there are a few curious similarities. One thing that caught my eye in the Wikipedia article on Shortage Economies [5] was the statement that queues were not just limited to everyday essentials. Even people wanting to buy cars and houses had to queue – in the Eastern Block the waiting time for a government apartment was measured in years. Up to thirty years in Poland, six to eight in Czechoslovakia and a mere three to four years in East Germany.

Anyone who remembers the Singapore Housing and Development Board (HDB) “walk in selection” debacle of 2007 knows what is coming next – until relatively recently Singapore did literally have people queueing up for the chance to buy a house. In early February of that year, a rumour started that HDB would soon be releasing a block of flats for sale in desirable locations. Almost immediately a queue started to develop outside the HDB office in Toa Payoh – but the pent-up demand for housing was so great that things quickly turned ugly.

A 26-year-old professional, who gave his name only as Dave, said he and his fiancée had taken urgent leave to join the queue.

He said: ‘Most people were satisfied with the organiser. Since no one was taking charge, it was good that someone tried to make sure there was no queue-jumping.

Said one man: ‘There was more than one queue and a group thought that theirs was the ‘official’ queue. So they started behaving like gangsters.’

To clarify momentarily, while the story above mentions people queuing for a few days, the reality is that the backlog for housing in Singapore is, just like in communist eastern Europe, measured in years. It was only at the moment that houses were rumoured to be released into the market that the people who had been waiting for years actually formed a queue. Since 2007 the system has changed – while there are no longer physical queues, overall waiting times are just as long. A story from early 2013 about young couples breaking off their engagements because they had initially rushed into marriage in a bid to be eligible to join the electronic queue for housing was particularly moving.

You could put it like this – the third party was HDB. I feel like I was forced to decide to get married early because if I waited until I was, say, 30 and ready to settle down, to wait another three to four years to get a BTO flat would leave me no time to start a family.
Janice

“I was so scared I couldn’t breathe, but I knew I had to do us both a favour and call it off. Before the course, I was so caught up in his ‘idea’ of getting a flat – everyone was saying how difficult it was to get a good unit, horror stories about a five year wait stuck in bad rentals, I just got carried away, I guess.”
Marianne
Runaway brides in Singapore – Yahoo – January 2 2013[2]

Even more recently, from February 2013, we have a story of families in subsidised rental flats being required by the state to pair up and share accommodation with other families.

So the presence of multi-year waiting times for housing in Singapore is very much a reality. But what of the central planning angle? Kornai’s key insight remember was that central planning inherently causes shortages. In Singapore housing is very much planned by the government. In its simplest form this is reflected by 85% of citizens living in government built flats. The government owns and supplies the land to HDB – a statutory board under the Ministry of National Development – and the number and types of houses to build is very much government policy.

Minister Khaw said that he has ordered the HDB to ramp up capacity and to bring forward projects scheduled for early next year to this year.

He also directed the HDB to sustain the new pace of building, suggesting that at least another 25,000 flats would be built for next year or a total of 50,000 flats over a two-year period.
HDB ordered to ramp up building of flats – Yahoo – 28 May 2011[4]

So the two key pieces of János Kornai’s shortage economy puzzle are in place in the Singapore housing market, we have the central planning and we have the shortages, just as in communist eastern Europe. This is obviously concerning – it means that the struggle Singaporean’s face in getting a flat are inherent to the planning system and not just a function of incompetent government that can be fixed by replacing one minister with a better one. But first let us take a slightly broader look at shortage economies. It could just be a co-incidence that Singapore has these features, so it seems wise to take a step back and look at what else Kornai said.

The common results of these shortages for consumers are forced substitutions between goods which are imperfect substitutes and forced savings as consumers are unable to fully utilize their current purchasing power. The institutional outcomes involve the so-called soft budget constraint, in which production units under a planned economy form expectations of always being bailed out by central authorities, paternalistic behaviour on the part of the planners who blame the shortages on the fact that consumers demand “wrong things”, and in macroeconomic terms, repressed inflation resulting from pent-up demand.
emphasis Added [5]

This paragraph, from Wikipedia, contains many insights into the Singapore housing market and wider economy. Forced substitutions refers to the case where someone wishing to buy a HDB but cannot, may have to rent privately, purchase from the resale market or accept some other alternative. The point about forced savings is probably only interesting to conspiracy theorists who fear CPF insolvency and may like to point out that preventing people from withdrawing to purchase a house helps to keep CPF balances in the black. The argument about soft budget constraints is quite complex, and I may have misunderstood it myself, but imagine a government-owned company tasked with implementing government policy, if the policy suddenly becomes harder to implement, the company finds itself in a position where it can negotiate for a larger budget to implement the policy. Since the government generally only judges the success of the company on how able it is to support the implementation of policy, it tends to suit both parties to over rather than under-allocate resources. So state companies tend to grow in size and become bloated and inefficient. In this instance the parallels with government handouts to bus operators are more obvious than in the housing market, but the point is still interesting. The most telling point however for Singaporeans is likely to be the one about “paternalistic behaviour” on the part of the planners who “blame the shortages on the fact that consumers demand ‘wrong things'” I imagine this is hard to believe for people outside planned economies, but in fact this is exactly what we see in Singapore. How often does a government minister come out to manage our expectations, or tell us we are being “too choosy”. The final point is about inflation being repressed under a centrally planned economy with shortages. This is presumably a side effect of people being forced to save and wait rather than spending now, so while it may be interesting to note that Singapore struggles with high inflation and further that the situation may be worse without pent-up demand for housing, this is more a symptom rather than a cause.

János Kornai had plenty of other observations to make on shortage economies which I will only touch on briefly. He noted that companies tended to become unproductive and bloated and suffered persistent shortages of labour – these are all results of the “soft budget constraint” wherein state enterprises are continually able to benefit from government handouts to smooth the path to effectively implementing policy. It is instructive to note that low productivity and on going labour shortages are exactly what we see in the Singapore economy today, so I think it’s not unreasonable to suggest that the shortage economies of eastern Europe appear, at least in part, to be replicated in Singapore.