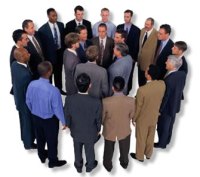 Kenneth Jeyaretnam used an interesting phrase to describe the nature of political power in Singapore recently – he described it as a “closed circle“. To me, this seems apt. From institutionalised patronage, to co-opted public bodies, and through the crushing of independent centres of influence, power in Singapore has been successfully arranged to support and promote the position of a core group of self-anointed leaders, while at the same time marginalising and excluding critical or alternative voices. An emergent alternative force – civil society – has started to (re)take root in recent times and poses a threat to the ruling party’s monopoly of influence by pushing back on the walls of the hard-state. It should come as no surprise then that the ruling party would seek to reclaim its turf, and we got a glimpse of that this week in the form of a somewhat incongruous government organised civil society conference.

Do these men represent civil society or state power?

At first glance it may not seem so odd for the government to organise a civil society conference, however if we consider Vincent Wijeysingha’s accurate description of civil society as “the space between the individual and the state“, then the slightly oxymoronic nature of the state organising such a gathering becomes more obvious. And with K Shanmugam as guest of honour, and Emeritus Senior Minister Goh as patron of the organising body – the Institute of Policy Studies at the Lee Kuan Yew School of Public Policy – this clearly is an event with significant state backing.

Immediately one wonders as to the motive of the ruling party behind organising such a conference. Coming on the back of government efforts to denigrate and marginalise some members of civil society, the fear that this may not be an impartial exploration of the relationship between the state and the individual is very valid. And with the backing of Messrs Goh and Shanmugam, two men with some history of abusing state power, the fear is only compounded. Let us not forget Goh has a long track record of involvement in dodgy defamation suits, and K Shanmugam only recently threatened (under the cover of darkness) to sue any individual sharing an online article vaguely critical of himself. Furthermore, rumours continue to swirl that K Shanmugam was once ESM Goh’s personal lawyer in bringing those same dodgy defamation cases which the PAP have made Singapore notorious for.

So it seems obvious that even with the best of intentions, these individuals taking part in a civil society conference bring with them a certain amount of baggage and vested state interests. Do we suppose that either ESM Goh or K Shanmugam are likely to argue vociferously in favour of greener pastures for civil society to flourish upon? Or is it not more likely that their scorched-earth policy toward the silencing of critics will be at the fore? We will have to wait and see on the outcome, but it seems likely that this event will give a probably thinly veiled nod to greater involvement of the state (read: ruling party) in civil society affairs at the expense of individual freedoms.

A look at some of the other invitees to this conference only throws up further examples for the argument that power in Singapore is organised to protect and support the ruling party. Just as in the picture at the top of this post, institutions that should be independent and looking outwards at the wider interests of society as a whole, are in fact inward looking and usually involved in a mutually reinforcing relationship with the state. The most obvious example of this is the mainstream media – previous and current Presidents SR Nathan and Tony Tan are former Chairmen of the notoriously pro-government Singapore Press Holdings. Following, but not quite filling, their sizable footprints comes one Janadas Devan, a former Associate Editor of the Straits Times who is now Director of the Institute of Policy Studies and who will give the opening address at the conference. However Mr Devan has another role to juggle with his position as Director of the IPS, he is also the Chief of Government Communications. In his address, titled “Our Future”, how will he balance these two roles? Will his message be one delivered impartially, occupying “the space between the individual and the state”, or will a twinge of “government communications” creep in. Will his vision for “Our Future” refer purely to “us” in civil society – as the title of the conference might imply – or will he somehow communicate an encroaching role for the government, further invading that space which is logically defined as existing outside of it.

Without wanting to pick apart the credentials of all the attendees, one Hans Goh and the Migrant Workers Centre of which he is executive director are certainly worth a mention. The Migrant Workers Centre, for those who are not aware, is one strange beast – despite claiming to be a “non governmental organisation” or NGO, it was in fact set up as a joint venture with the government linked NTUC and has a PAP MP – Yeo Guat Kwang – as Chairman. Alex Au quite rightly pointed out the linguistic deformity in calling such an entity an NGO, but this deformity is by the design of the ruling party, and clearly exists to place a government sanctioned entity into a position of power in, again, “the space between the individual and the state”.

So the presence of this government linked NGO at a government sponsored civil society conference is, I would argue, not accidental, but in fact enlightening. It shines a light on the way power and influence is organised and structured in Singapore, and how the ruling party intend to keep things this way. The state comes first. State sponsored and co-opted institutions come second, set up and organised to protect and reinforce the power of the state, just as in the image at the top of this post. Lastly comes the individual, with almost no space left to act under his or her own free will. The space individuals enjoy to exercise their freedoms is so limited precisely because it has been encroached upon by a state ever eager to expand its sphere of influence.